I’ve long been a fan of crime fiction.  Most of the books I read growing up were the works of Sir Arthur Conan Doyle, Ian Fleming, & Agatha Christie, to name a few.  It was a decidedly English upbringing, with works from Stephen King and Robert Ludlum to add some American flavour. As I’ve grown older, though, I’ve been drawn to the hardboiled world of the American pulps.  I’ve amassed quite a collection of them over the years, and I’ve discovered American writers like Raymond Chandler and Dashiell Hammett. This broadening exposure has, in turn, influenced my movie watching.  I recently picked up Walter Mosley’s Devil in a Blue Dress, and it absolutely blew me away.

Devil in a Blue Dress, written in 1990, was the first book in his series about Ezekiel ‘Easy’ Rawlins, a Black ex-soldier in LA in 1948.  Fired from his job at an airplane factory, Easy needs money to pay the mortgage on his house.  A friend introduces him to a man looking for a woman.  The woman, Daphne Monet,  is the girlfriend of a politician, and she’s disappeared. She’s a white woman, and has been known to frequent some of the black clubs of LA, so the man needs someone to search for her in the clubs white men can’t, or won’t, get into. Easy reluctantly agrees, and he soon finds himself mixed up in some very serious murders. Things go from bad to worse when an old friend of Easy’s appears, a sociopathic killer from Houston by the name of Mouse.  The book pulls no punches in showing the racism of LA in the era, and the result is one of the best mysteries of all time.  The book was optioned and, in 1995, was released as a film of the same name, starring Denzel Washington, Jennifer Beals and Don Cheadle.

The film, while keeping the basic premise of the book, goes its own way with the story, delivering a solid, hardboiled film. The story in the film is a lot less complicated as the one in the book, but still manages to pack a punch. Denzel Washington as Easy is very much the Easy of the book: he owns his own home, and he’s desperate to hold onto it. Searching for Daphne seems simple enough, but events quickly escalate, and his desperation turns into a determination to come out with something more.  Jennifer Beals is very appealing as Daphne Monet, and recalls the era of vintage femme fatales very nicely. As Mouse, Don Cheadle brings in a very cool performance. Rounding out the cast are Tom Sizemore as Albright Easy’s client (and a man almost as dangerous as Mouse), and Maury Chaykin as mayoral candidate Matthew Terell. 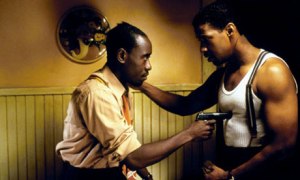 Like the book, the film is told from the perspective of Easy, using narration to move the story along. If it has a drawback, it’s writer/director Carl Franklin’s more stylized expressions of Easy’s thoughts.  On a couple of occasions, Easy’s narration is overshadowed by flashbacks or visions.  I assume they’re there to add poignancy to his words, but for me, they were just a distraction and unnecessary. The film works as a hardboiled look at racism in post-WW II LA, and the flashbacks really add nothing to the story. Nitpick aside, though, this was a great modern take on a classic genre.