Made the year before Steven Spielberg invented the blockbuster movie with Jaws, this small-scale drama based on a true story is clearly the most atypical film on his resume. It was this incongruity which put me off watching Sugarland Express. Spielberg’s gifts are for grand spectacle and this kind of material seemed more suitable for a filmmaker with a harder edge, maybe Robert Altman or Michael Cimino. I also have a preference for Spielberg when he’s doing blockbusters rather than ‘serious’ work though I rate Munich (2005) very highly. Then there’s his tendency for over-sentimentality. The thought of a Spielberg movie about Goldie Hawn trying to get her baby back from social services gives me a headache just thinking about it. So I’d always been fairly ambivalent seeing The Sugarland Express and to be honest if I hadn’t signed up for Cinema Shame I doubt I’d have been in a hurry to watch the film. 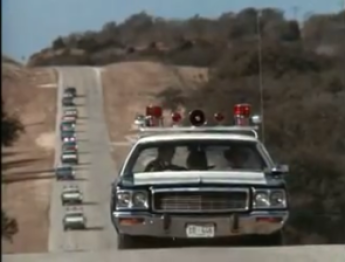 The Sugarland Express is based on the antics of real-life couple Robert Dent and his wife Ila Fae who abducted a state trooper and were pursued by over a hundred vehicles across Texas. Screenwriters Hal Barwood and Matthew Robins have amended certain details including the names and to a certain extent have softened the story by giving Lou Jean (Goldie Hawn) a motive for breaking Clovis ( William Atherton) out of prison. The authorities have placed their child in foster care. This feels like Spielberg and his writers don’t trust the audience to emphasise with the protagonists unless they are given a sentimental reason to root for them. Everybody’s a little too nice. Slide (Michael Sacks), the easy-going state trooper taken hostage undergoes Stockholm Syndrome almost immediately, while their pursuer Captain Tanner is the type of sad-eyed Western hero the great Ben Johnson played throughout the 70’s with quiet dignity. 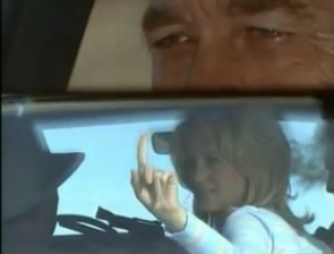 Despite this there’s much to enjoy in The Sugarland Express. Barwood and Robins witty screenplay satirises ongoing news coverage years before Tarantino penned Natural Born Killers (94, Oliver Stone). It’s also fascinating watching one of the most technically gifted filmmakers in the history of cinema honing his technique. Though a fairly low-key film there’s no mistaking Spielberg’s gift for showmanship. Particularly during a stunning car chase as Slide pursues them through a town and the countryside while the terrified drunk he was taking to jail explains how he’s breaching the highway code. In fact there’s a lightness of tone which is comparable to the kind of film Burt Reynolds would appear in post-Deliverance (72, John Boorman) though one of Spielberg’s greatest virtues is his lack of interest in machismo. Atherton, best known for playing assholes in 80’s movies like Ghostbusters (84, Ivan Reitman) and Die Hard (88, John McTiernan) is no wild rebel but a dithering idiot who puts everybody in danger without quite meaning too. Tanner (Johnson is the gentlest of movie tough guys) prefers to solve matters without killing and efficiently slaps down a group of vigilantes looking to make a name for themselves.

So do I feel guilty for avoiding The Sugarland Express? A little. While it does feel like a weaker version of other movies being made during that era it’s clearly a key moment in the development of Spielberg’s career. It’s also much less mawkish than expected with any sentiment kept in check by the screenplay’s humour and the unavoidable sense this journey will end badly and there’s nothing those involved can do to prevent it.