I watched some movies in 2014. No really, I did. Quite a few actually. My profile on Letterboxd suggests I watched 154 movies, not counting the ones I forgot to tag. Of course there were some rewatches and Bond movies that factored into that total. Some of those 154 were downright SHAMEFUL. For the inaugural year of Cinema Shame, I didn’t hit the dirty dozen exactly, though I did watch The Dirty Dozen for the first time.

Here’s my initial list, posted at the end of January:

Holy shit is this movie a slog. Like Molasses in January… in Alaska… if Elsa got f’ing pissed.

Due to my schedule I had to break up this Kubrick classic into four different sittings. Despite the pace, I didn’t dislike Barry Lyndon. I’m intrigued/mortified/confused/bewildered/fascinated by Barry Lyndon. I also have no desire to rewatch Barry Lyndon anytime soon, though I’m also curiously drawn back to it. Watching the film is akin to sitting before a painter’s canvas perpetually in motion. I had to do a quick search to reveal why Lyndon appeared so extraordinary beyond the face value of the sunning composition from cinematographer John Alcott. From Wikipedia:

Most notably, interior scenes were shot with a specially adapted high-speed f/0.7 Zeiss camera lens originally developed for NASA to be used in satellite photography. The lenses allowed many scenes to be lit only with candlelight, creating two-dimensional, diffused-light images reminiscent of 18th-century paintings.[76] Cinematographer Allen Daviau says that it gives the audience a way of seeing the characters and scenes as they would have been seen by people at the time.

But beyond the cinematography and innovative lighting/camerawork how or what makes Lyndon a classic? Aye. This is the real challenge.

It occurs to me that maybe that’s just it — Barry Lyndon is Kubrick’s challenge to viewers that resist weighing form, composition, color, light, music, mood, feel and other intangibles when considering the value of these “moving pictures.” Film is a visual medium, enhanced by music and sound and dialogue. The origin of all cinema is the silent image. What if Barry Lyndon is the talkie that aspires to render talk and complex narrative irrelevant? Kubrick wanted to turn back the clock to a time before the silent The Great Train Robbery perhaps? What do we gain from the dialogue? I can think of nothing important conveyed throughout the entire 3-hour run-time that originated from the lips of any character, Ryan O’Neal or otherwise.

There’s also strikingly little character development, melodrama or emotional engagement. The character of Barry Lyndon is a bit of a cad, but not egregiously so. He’s at worst a foolish stumblebum, making bad decisions and falling into unfortunate circumstances. This suggests, at the very least, a reading that leans on Nietzsche’s philosophy on “Slave and Master Morality” that suggests that the Will to Power is the exploitation of the sentimental weaknesses of equality among people. I’d go boldly down this path if A) I had time to rewatch Barry Lyndon all in one sitting and B) had studied Nietzsche for more than a collegiate millisecond. Since this is a blog of offhand thoughts, I feel this superficial connection is completely justified. I will now move on and you can call shenanigans all you like.

So It’s A Wonderful Life is truly wonderful, but castrated by popular culture 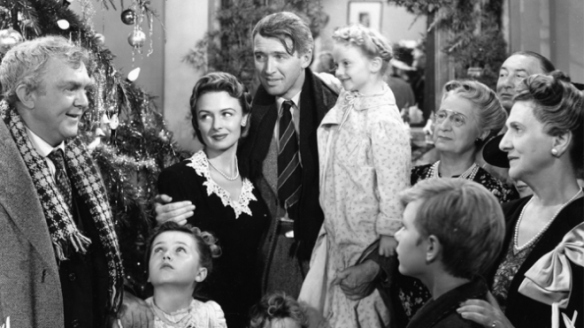 Of all the films I watched for this Cinema Shame project, I proclaimed It’s A Wonderful Life to be the most egregious oversight. True. But I hadn’t watched it to date despite my affection for Jimmy Stewart because I felt that it was impossible to approach the film fairly. Our culture has mindlessly regurgitated the morals and mantras of IAWL through satire, earnest homage and gross sentimentality. What’s left for the first time viewer to discover? I’m happy to finally have enjoyed a firsthand viewing of Frank Capra’s Christmas staple, but I’ll need at least another viewing to fully dissipate preconception. My cockles were duly warmed, however. Maybe I’ll reserve a spot for it among The Ref, The Shop Around the Corner and National Lampoon’s Christmas Vacation in my 2015 Christmas viewing rituals.

So Cabaret features a lot of Germans

It’s the Liza! and Joel Gray show! Starring Liza! and Joel Gray! CABARET was far more than just “Fosse.” CABARET was a heap of extraordinary character and music and garters and m’f’ing Nazis. The best Nazi-musical since Springtime for Hitler. If I’m being completely honest, I had no idea that Cabaret had anything to do with World War II. Funny, right? Anyway, I loved Cabaret and hope to revisit the film soon. 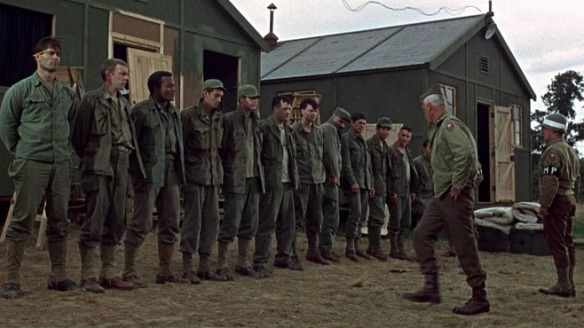 Born in the “Golden Fleece” tradition of the 60’s and 70’s, The Dirty Dozen falls under the specific category of “Epic” Fleece along with, say, Seven Samurai and even Star Wars. Succinctly the “Golden Fleece” sub-genre requires a team gathered to acquire or fight for a common goal/item. Enter a dozen condemned misfits under the command of a misfit commander (Marvin) heading into German territory on a suicide assassination mission.

The rote assortment of cliched/immobile archetypes feature some very familiar faces — Charles Bronson, Jim Brown, John Cassavetes, Telly Savalas, Donald Sutherland and Clint Walker. Though little attention is given to each individual, Savalas and Cassavetes garner the most juicy screentime as the respective lunatic and red herring. The most entertaining scene belongs to Donald Sutherland, who manages a bit of good-spirited lunacy.

The knock on many of these “Golden Fleece” films is that the characters rarely have the space to develop or change. Obviously, the audience doesn’t require a dozen meaningful character arcs, but they do require some change, some obstacle. And while the obstacle always looms somewhere off in the distance — we know that they will eventually come to meet the damn Germans — the film lacked a precise presence of villainy. At first it’s the damn bureaucrats (Ernest Borgnine)… and then it’s each other… and then it’s some other damn bureaucrats (Rex Ryan)… and then it’s the Germans… and then based on the pattern, presumably some more damn bureaucrats.

I believe that the shifting focus could have been overlooked had Character with a capital “C” been honored in order to pay  greater dividends upon the film’s finale. I enjoyed The Dirty Dozen greatly, but the enjoyment remained superficial. I just expected something else, something to pay it all off before the credits rolled… something more akin to The Wild Bunch.

1. Was anymore more badass than Charles Bronson? He lays out John Cassavetes with little more than a steely gaze and a flick of his will. Lee Marvin’s the star here, clearly, but Charles Bronson owns every scene in which he appears.

2. I had no idea of the breadth of Robert Aldrich’s filmography. He’s a director that seems obscured the films he directed. The Longest Yard. The Dirty Dozen. Kiss Me Deadly. What Ever Happened to Baby Jane? Hush Hush Sweet Charlotte. Hell, he even directed The Frisco Kid and 4 For Texas. Of all of those titles I only ever associated him with Kiss Me Deadly.

So I’m late getting to the party. Hopefully I’m still fashionably late without being embarrassingly late. But isn’t that the point of Cinema Shame? We’re all a little late getting to a party that we believe is worth attending for some particular reason, and the embarrassment of our tardiness has evolved to…shame.

I’m thankful my hosts were gracious enough to not only extend the invitation, but to open the door about a month after the party started, and to allow me to enter, shamed, but with style.

The parties I’d like to attend (yes, I made it to the January and February bashes, and they were swell):