I’ve been watching… oh have I been watching… but I’ve long neglected the part of this project that documents thoughts and feelings. This is important. This is the catharsis.

As a creator of Cinema Shame, I feel obligated to be a role model. And even when I finish this second installment of Zatoichi Shame, I’ll still be delinquent on posts for The Commitments, The Gold Rush, and a handful of W.C. Fields films. As W.C. Fields would say… “Godfrey Daniel! Lets cut through the jibber jabber!” …which is a weird intro to Zatoichi, but roll with it.

Last we checked in with my Zatoichi journey I’d just finished the first four installments and noted a few interesting DNA matches with James Bond.

After the series switched to color after The Tale of Zatoichi (Zat 2) Continues, the color films had failed to distinguish themselves visually. Zatoichi the Fugutive (Zat 4) told a ripping tale but looked like a B-production. Zatoichi on the Road marks a step forward in the franchise. Director Kimiyoshi Yasuda makes clear and distinct compositional choices. He allows his camera to linger and bask in the color and landscape. Yasuda also amplifies the action and fight choreography. In many ways Zatoichi on the Road circles closer to the Zat-ideal. It also loses some of the character development and meaningful subtext that breathed life into earlier Zatoichi films.

The narrative doesn’t stand out in my memory. (WELL IF YOU’D WRITTEN ABOUT THIS SOONER, MORON, MAYBE YOU’D REMEMBER.) In Zatoichi on the Road, our mythic hero has sworn to protect a young woman and finds himself (again) at odds against two rival gangs. Some of that moral complexity comes through in the young woman’s struggle against the male hierarchy of perpetual assholiness. She’s wanted for killing the man who tried to rape her.

It’s Zatoichi that feels stuck in a limbo throughout Zatoichi on the Road. Already, here in the fifth film it’s growing difficult to compare and contrast the films. Shintaro Katsu imbues the Zatoichi character with so much vitality and depth (gambler, drinker, spurned human and lover, slovenly eater, etc.) that when we reach a film that removes the focus from the depth of Zatoichi’s character, it’s easy to find the film wanting even though it excels in many aspects of pure, visual cinema and storytelling. Some rank this as a favorite Zat-pic, but my meager notes on the film seem to corroborate my latent sense that the film belongs in the second tier of Zatoichi. 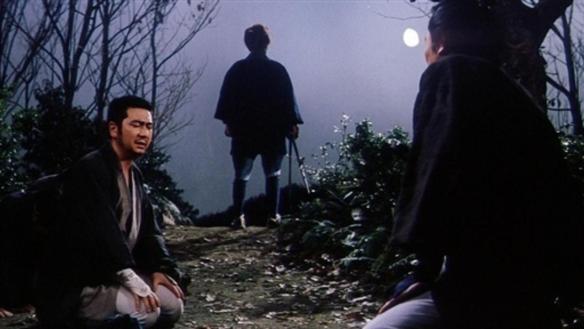 “The first of the Zatoichi films that feels B-grade in execution. Lesser film stock (?). More blood. Some gratuitous (!). But the story engages, unlike prior On the Road. More Zatoichi quirks and more of the worst of humanity on display.”

This is Zatoichi moonlighting in an exploitation sandbox. The casting of Tomisaburo Wakayama (who would later star in Lone Wolf and Cub) as the villain sets up certain expectations. Zatoichi and the Chest of Gold delivers on all of it.

A face-value uglier Zatoichi picture, Chest of Gold foreground stunts and action choreography. This is the type of Zatoichi picture that’ll take you by surprise now that you’re in the Zatoichi groove. The narrative concerns some missing tax money. Zatoichi, who happens to be in town to pay his respects to a dead man, of course, gets blamed. He’s an outsider, a blind man. As “the other” he’s certainly to blame. Money turns average men into monsters. At first, Zatoichi, the noble warrior, attempts to navigate the fracas with logic and reason. Soon the logic and reason gives way to bloodshed and violence because evil men get what they deserve.

An arterial geyser spray might shock you. It’s the first truly magnificent bloodshed in the series. It certainly took me by surprise. It also took my daughters (ages 7 and 4 at the time) by surprise as I’d been letting them tune in to my Zatoichi marathons because the bloodletting had been nonexistent and death scenes mere chest-clutching.

Zatoichi and the Chest of Gold, however, only serves as a ramp up to the next Zatoichi picture. 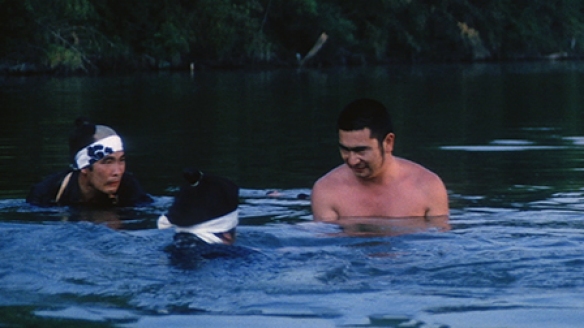 “So that scene where Zatoichi leads his combatants into the river before dropping beneath the water and attacking like a killer m’f’ing sword-wielding shark.

AND THEN THAT SCENE IN THE DARK CORRIDOR. HOLY MOLY DID I LOVE THIS ONE.”

I had some other thoughts but they lack the all caps.

Zatoichi’s Flashing Sword also from Chest of Gold director Kazuo Ikehiro takes everything I loved about the former picture and turns it up to 11. The film opens slowly. Some goofy and occasionally funny comedy at the expense of Zatoichi’s blindness dominates the first third. The casual cruelty stands as another blemish on humanity. Everyone, it seems, can’t help but demean our hero. The film indulges in a small dose of slapstick — a refreshing re-introduction after the grimmer Chest of Gold.

The narrative again pits two villages against each other in a local squabble over river-crossing fees. One guy charges too little. He believes river-crossing is a right! The other guy wants to create a monopoly and bleed the poor river-crossers dry! BWAHAHA! Between the long stretches of political machinations and goofy comedy, you’ll be wondering you’re ever going to see Zatoichi’s sword again, let alone a flashing sword.

And then the whole film shifts in a moment. Zatoichi flips his “Jules Winnfield path of the righteous man” switch and suddenly Zatoichi’s Flashing Sword becomes one of the most innovative and majestic swordplay bloodbaths in cinema history. THIS IS NOT HYPERBOLE. Well, maybe a little. BUT IT’S NOT.

Your ultimate opinion of the film rests on how strongly you value the action set-pieces contained in the final third of the film. The film lacks a consistent, driving purpose. Zatoichi again attempts to navigate politics without bloodshed, but power-hungry maniacs only respond to violence.

To give you a taste of the transcendent set pieces:

Zatoichi lures a handful of skilled combatants into the water and then drops into the murk where he systematically drops them one by one (see above shark comment).

Zatoichi massacres an entire army of swordsman while fireworks light his gnarled, angry face. A rare occurrence when Zatoichi’s placid exterior falls alway in the face of pure evil.

Lastly, there’s this brilliant moment of pure cinema when Zatoichi lures his attackers into a pitch-black house. Zatoichi runs through the house extinguishing the candles to eliminate their advantage. Shades of Barry Lyndon — as the entire scene was shot using only the ambient candlelight.. at least until the scene goes black except for the contrast of shadow versus complete blackness.

I still get giddy when I think about that last scene.

“An emotionally resonant entry in the Zatoichi series that punctuates our hero’s inability to trust or love. It’s not that he’s unwilling; it’s that he recognizes the consequences for anyone that loves or depends on him. He’s forced to give up a baby to which he’s promised his undying care. He abandons the woman who’s professed her love. He once again heads out, alone and heartbroken, into a world of moral turpitude.”

F, Z, F forces Zatoichi into the role of caregiver as he attempts to deliver an orphaned baby to its father. After the badassery of Flashing Sword, director Kenji Misumi tones down Zatoichi’s sword skills and brings back the emotional resonance missing from the last few films. In many ways, Fight, Zatoichi, Fight is a gut punch. The plight of the newly orphaned baby mirrors Zatoichi’s sense of homelessness. He doesn’t belong. Without family, without love, without a home, Zatoichi wanders this world looking for acceptance.

At one point, Zatoichi doesn’t have money or food. In order to sooth the hungry child he offers his own nipple for suckling, merely hoping the child will find a moment of peace.

8 down. 18 more to go. Zatoichi will return in So Zatoichi is kinda like James Bond, except blind – Vol. 3.